The Angkor complex is truly one of the wonders of the world. It is a sprawling complex that spans five hundred acres and consists of around 72 temples. The temples are of varying condition and size – some seem like fortresses, others resemble small chapels.

The complex is often referred to as Angkor Wat. In reality, Angkor Wat is a temple city build in the 12th century. It is the best preserved and most complete of all the temple complexes in the area. Angkor Thom was a fortressed city state built in the 13th century with multiple temples, with the Bayon (the one with many faces) at its heart.

The Ta Prohm Temple (also famously known as the jungle temple) is outside Angkor Thom.

We booked the three day pass, which we encourage if you have the time and enjoy walking around, and photographing in, archeological sites. We were here in January, and the weather wasn’t too hot, so three days was easily doable. I remember being here a decade ago sometime in April – the hottest month in Cambodia – I gave up sometime after lunch on day two, opting for the pool instead. Our visit this time was much more pleasant.

I enjoyed revisiting Angkor – I love Siem Reap and I’ve been there twice now. When I do go back again, I would certainly drop by the temples once more. They never get old, and there’s so much to see you can never quite remember what you’ve seen before and what you’re seeing for the first time. Although I’ve spent many hours there and tried to hit as many temples as I could, I’m sure there are still quite a few which I haven’t visited.

Also, the temples are under constant conservation works, so there were some temples that were inaccessible the last time that might be fully restored the next time we visit.

We visited the main temple – Angkor Wat – early in the morning. We would highly recommend this. We arrived at the picnic area in front of the temple, facing East, before the sun rose. The air was fresh and cool and there was excitement in the air as the people who gathered to witness this natural spectacle waited for dawn to arrive.

I still remember the moment the sun came over the horizon, painting the sky a beautiful pink first, and the bright blue that followed. The light mist that had settled over the temple lifted with the first rays of heat and the silhouette of the temple came into full view. It was amazing to see it in increasing detail as the sky lightened.

But of course it wasn’t just the temple itself, it was everything around it. The beautiful parkland, the huge ponds with lillies in them, it was a beautiful, meditative moment.

After Angkor Wat, the second most famous temple must be Ta Prohm, otherwise known as the Jungle Temple, made famous in Tomb Raider. This temple is truly unique among all the temples – it seems dug into the very earth itself, with the roots of the banyan tree and strangler fig wrapping around the doorways of the buildings.

Ta Prohm is probably my favourite temple. I remember being there at lunchtime (when it was hottest) and there being almost no one else around. It’s the best place to find a cool spot to take a break from your hike around the complex. Under the shade of the banyan roots, it’s surprisingly cool.

When we were there this time, we noticed the famous “stegosaurus” relief. We tried to disprove it – maybe it was a lizard of some sort, and not an actual dinosaur… But try hard as we might, however we looked at it, it still seemed like a Stegosaurus with the bony fan over its back and the knobbly head.

One thing I noticed about the temples was how there were a lot more walkways built over the stone compared to when I was here first. I suppose it’s both to protect the archeological site and to prevent tourists from slipping up and killing themselves over the smooth, worn limestone.

On this second visit, I also noticed there were a lot more touts then there were previously, and they seemed to really like the jungle temple. There are all sorts around and its pretty difficult to get rid of them once they think they have your attention. Most of them are “fake guides” that attempt to chat you up and then tell you silly details about the temple (ones that you already know, or are self evident). They make your visit unpleasant and then try to charge you for it at the end. If anyone attempts to approach you, we recommend ignoring them, hard.

Bayon is one of the most iconic temples in Angkor. You know those pictures of large stone faces you see in photographs about the temple complex? They’re from Bayon. The amazing thing about this temple is how well the faces have been preserved and restored. The smiling bodhisattvas have truly serene visages – as a matter of fact we were here just as the day was really starting to heat up and I felt looking at those faces subjectively lowered the temperature for me by a couple of degrees.

A temple I find really impressive is Baphuon. It was built about a century before Angkor Wat (mid 11th century) and is one of the first mountain temples constructed, built in the representation of Mt Meru, something like the Khamer version of the Greeks’ Mt Olympus. This temple rises up several tiers to a “pinnacle” that is a square summit cornered by four towers. People usually don’t bother to climb all the way up, so this is the best place to enjoy a beautiful view of the temple complex all on your own.

Up here, alone, you’re free to imagine how life must have been like for those who lived here back then, deeply tied into nature and rooted in their communities.

At the end of the day, all these structures are religious in nature, so spirituality was a big part of the lives of the Khmer back then (and still is). It’s a bit difficult for me, as an atheiest, to imagine why anyone would expand so much effort putting these wonders together – but then again, a lot of ancient civillisations did. The pursuit of eternal life, whether literal or metaphorical was a big deal in our past.

Angkor Wat, and by extension, Angkor Thom, was shortlisted for the new seven wonders of the world but unfortunately did not make it in. I thought it was a real pity that nothing from South East Asia made it into the list, especially something so unique as the temples of Angkor.

On the last day of our three days in Angkor Wat/Angkor Thom, we left in the late afternoon, having seen quite enough of the temples. They are beautiful and impressive, but it’s also quite a lot to take in, hundreds of years of history and architecture of an entire civilisation in a mere three days. On our way out, we walked past an exposed stone passage that cut across a field of grass. The air was staring to cool down and the grass rustled in the cool breeze, as if saying goodbye. 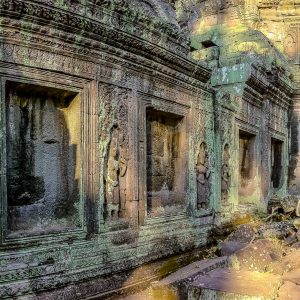 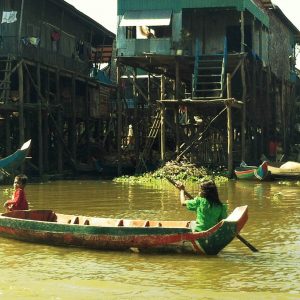