As the sun sets, its golden glow casts over the plains of Mara Naboisho. All through the landscape are hundreds of acacia trees, their crowns tinted red under the evening sun. The watering hole below Eagle View Camp reflects the colour of the fiery sky, its still, glassy water taking on vivid hues. The sunset at Eagle View is an incredible one. A view worth travelling to the Masai Mara to see.

However, there’s so much more than the view at Eagle View Camp. The camp is located in the wilderness, hidden among thick bushes. Plenty of animals pass through the camp premises, day and night. The lodge combines the comfort of a top-tier hotel with the experience of camping in the bush. Out here, you not just surrounded by nature, you are in its very heart.

If you want to experience the Masai Mara without the crowds, we recommend staying a few nights at Eagle View Camp. The camp is located in the Mara Naboisho Conservancy which is next to the Masai Mara National Reserve and part of the same ecosystem. Unless you have a bed at one of the lodges within Naboisho, you cannot enter the conservancy. Because the number of beds is limited, you will not encounter many vehicles during your game drives in Naboisho. For visitors to the Masai Mara craving a more private experience, a few nights in the Mara conservancies (e.g. Naboisho and Mara North) is a must.

We feel this is especially important for photographers who don’t want to always have other vehicles in their shot. If you are visiting the Masai Mara during peak season, when the great migration takes place, it might be a good idea to stay in Naboisho. It has one of the best ratios of beds per acre of land, and remains uncrowded even during the busiest of seasons.

On top of the exclusivity afforded by staying at Eagle View Camp, several other privileges also come with a night’s stay here. In Naboisho, it is possible to do walking safaris and night drives. It is also possible to follow big cats off the road (you can also do this in Mara North and the other Mara Conservancies).

It is worth mentioning here that Eagle View Camp is part of a more extensive operation called Basecamp that owns a few lodges in Naboisho and the Masai Mara area. Because of this, they can do whole day walking safaris that take you from one camp to the next. Even if you choose to stay put and not move from Eagle View Camp, you can still do a walking safari. The camp can arrange this for you, with their Maasai guides.

The Maasai will take you safely through the bush and enrich you with plenty of information along the way. We did a morning safari walk with them and have written about it here – Walking Safari in Kenya’s Masai Mara. It’s an experience you shouldn’t miss if you are staying at Eagle View Camp. I wished we had more time to do a whole day walking Safari. We’ll be back to Naboisho to try this activity.

One of the significant advantages of staying in a conservancy is that you’re allowed to go off-road to get closer to a big cat. We did this in both Naboisho, while staying at Eagle View Camp, and Mara North while staying at the Royal Mara Safari Lodge.

Eagle View Camp had a dedicated and talented tracker while we were there. Wilson accompanied us on a night drive, and also an early morning ride. Both times, he took our guide, Joseph Mbotte, and us off the road, leading us right into a pride of lions. We got close to them, and this made for some truly incredible photographs.

Because the game drive starts right outside the lodge in Naboisho, you can see nature as it is in the wee hours. There’s no long wait to get into a reserve, which will rob time off those precious golden hours. During peak season, sunrise is around 6:20 A.M. The entry gates to the Masai Mara National Reserve open at 6 A.M., unless you are fortunate, you won’t get that sunrise shot on the savannah. The same goes for sunset – you need to leave by 6 P.M. from the Masai Mara, and the sunset is usually around 6:20 P.M.

One of the highlights of staying at Eagle View Camp was the night drive. We did this with their dedicated tracker, Wilson, who took us around the Naboisho plains well after dark. Despite there being almost no visibility, he managed to find a pride of lions with three cubs in the pitch darkness. The combination of being able to do night drives and a talented tracker is priceless. The entire experience was incredibly unique and memorable. You cannot do night drives in the Masai Mara National Reserve (unless you stay in one of the hotels in the Mara Triangle, which is a conservancy owned by Narok County).

At Eagle View Camp, we met the outgoing manager, Tony Musembi, who filled our days with plenty of activity. When we told him we were interested in conservation efforts in the Masai Mara, he recommended we visited Basecamp Explorer. Basecamp Explorer is a lodge and conservation project beside the Talek River, located in the Masai Mara ecosystem. This camp is famous for its extensive reforestation efforts, and its “Obama Forest”, which is the forest planted in his honour in the land surrounding the campsite.

During our trip to Kenya, we would get to meet many local and foreign conservationists, working to preserve the country’s natural wonders. We highly recommend visiting conservation efforts during your holiday in Kenya as it rounds off the safari experience. By visiting the conservation efforts at Basecamp, we got to understand the monumental tasks Kenyans face when it comes to maintaining their natural environment. We also got to see how intimately connected the Maasai are to nature, compared to us from the west. It was a truly eye-opening experience.

We were glad we stayed at Eagle View Camp for three nights and wished it could have been longer. There was not a moment spared while there. We had something to do every hour we were there, and each moment was special.

The facilities at Eagle View Camp are fantastic. The main area sits on the highest point of the escarpment, overlooking the never-ending Mara Naboisho plains. The site faces west, so it is a fantastic spot for sunsets. In my opinion, it was the most breath-taking sunset we experienced on our entire trip. However, the sunset over Shimba Hills on the Godoni Cliffs comes a close second.

There is a lovely fireplace set into the floor of the terrace, and staff light a fire there every evening. It’s a great place to have a drink and catch dusk as it falls.

The restaurant is right beside the terrace, and also has the same magnificent view. There’s always tea, coffee and home-baked cakes and biscuits during the day, which I liked. It was nice to have a little something before pre-breakfast game drives and before the late-afternoon game drive.

Basecamp is a Norweigian company and the decor of the tents had that simple, Scandinavian look. I liked it because it was uncluttered and there was enough shelving for clothes and luggage. The bed was comfortable and provided a good night’s sleep.

Because the tent is high on an escarpment, it can get quite windy, so its best to put down the tent flaps at night. There is no working desk in the tent – if you have a lot of camera gear, you might have trouble getting organised. However, it is a minor inconvenience and would not deter us from returning to Eagle View Camp in a heartbeat.

The staff at Eagle View Camp are a stellar lot. Basecamp hires the majority of its staff from the surrounding communities (I think the only exception was the manager, everyone else was born within the county). They were friendly, personable, and open. We had a few long chats with them by the campfire which we treasure greatly. These conversations provided insight into their daily lives and their communities. Of particular interest to us was how their communities have evolved over decades, as the role of conservation in their communities continues to grow.

The Food and Chef

Eagle View Camp’s head chef, Benson, can cook up a real feast. Initially hired as an Ascari (a Maasai guard), he found his calling as a chef over the years. It took lots of perseverance and hard work, but he eventually rose to the level of head chef for one of the world’s most prestigious lodges. He’s perfectly at home cooking both western style dishes and Kenyan cuisine. The meals at Eagle View Camp are on the level of international five-star hotels in Europe.

The staff surprised us one evening by organising a bush dinner on the premises of Eagle View Camp. It was a unique experience. They had set up a table among some bushes overlooking the Naboisho Plains. The table was lit with oil lamps, giving the scene a cosy, warm glow. Surrounded by bushes, it was an intimate yet wild, setting. The food served was traditional Kenyan cuisine, which gave the experience a real sense of place.

We would return, in a heartbeat, to Eagle View Camp. The price per night is on the upper limit for lodges in the Masai Mara, but we felt it was worth it. The exclusivity on game-drives through Mara Naboisho, the ability to do night drives and safari walks, and the stunning view were all truly priceless experiences.

Lake Naivasha and its Denizens

Hell’s Gate – There and Back Through the Rift 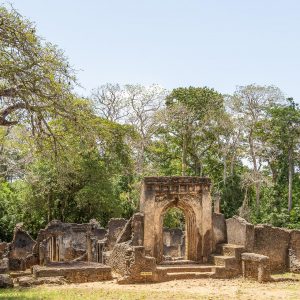