During the several days that we stayed on Kenya’s East Coast, near Mombasa, we went on a few day trips, for this region has a bit more to offer than just Sea, Sand and Sun. After negotiating a fee with our driver for the day, we took off northwards, towards the Malindi region. It is roughly a 2 hour drive, on a really good road.

Beware though, you will pass through many densely settled towns and villages where people are generally rather relaxed about crossing the road, and your driver may, and very likely will, drive much faster than one may deem safe. Now, before accusing us of being skittish, do know that the amount of wrecks and road accidents we came across during our time in Kenya far outnumbers any other part of the world we have ever visited. Thus, should you be inclined so, tell your driver to drive more carefully – they are always very happy to oblige.

The drive there was an experience unto itself. We could not peel our eyes off the car windows, for there was always something interesting to take a look at. Roadside stalls filled with colourful exotic fruits – check, cattle herders with their sheep or cattle slowly meandering along – check, children in bright blue uniforms going to school through a cloud of road dust – check, mighty baobab trees dotted amongst various crop fields – check…

With so much to see, the entire trip went by deceptively quickly, and soon it was time for us to get off the main road, and head towards the small seaside town of Watamu. Our mysterious main destination for the day was just a couple of hundred metres away.

Gedi Ruins – Shrouded in Mystery, or Perhaps Not

I am talking about Gedi Ruins, also often referred to as Gede Ruins. It is a site of a once very prosperous city that thrived between the thirteenth and seventeenth century, when it was abruptly abandoned in a move that still baffles archeologists and historians alike. Moreover, for such a wealthy settlement, there are practically no written records of it for any period of its four centuries of existence.

As soon as we got our entrance tickets and hired a guide, we started our walk down a forested path towards the ruins. Not long after, on our right, a square surrounded by a decrepit white wall with obvious African-Islamic architectural influences appeared amongst the lush vegetation. I recall us commenting that it is rather well preserved, and starting to take photos. That provoked ironic laughter from our guide, who told us to take it easy with those “ruins”. For they were actually a museum, built less than two decades ago with the European Union funds, and unfortunately already looking several centuries old. It fell victim to the rampant corruption still very present in this part of the world. We were told stories of quality timber and stone being installed during the day, when the EU supervisors were around, and then removed and replaced with far inferior, often waste material, literally the same night. Having seen the state of the building, we have absolutely no reasons not to believe these stories – the place is basically falling apart before the very eyes of its employees.

The real ruins are actually very well preserved as well, seeing that they were lost to the eyes of the outsiders for more than two centuries, completely overgrown by a dense, humid jungle. Part of it may possibly be attributed to the local superstition of the “Old Ones” – the spirits of the Gedi priests who supposedly curse anyone who removes any artifacts from the ruins.

“Old ones” or not, the fact is that there are enough unanswered questions related to the ruins to give any conspiracy theorist plenty of material for developing all sorts of weird stories. Leaving those aside, the lack of any written records of this apparently very rich and influential settlement, build to an extremely high standard of both infrastructure and luxury, is truly baffling. Adding to it the fact that the Portuguese were present in the region for more than a century during Gedi’s heyday, but apparently had no clue of its existence, really is a head-scratcher.

The ruins themselves are truly magnificent. The remnants of the mosques, palaces, walls and houses, and once paved squares and streets, can really conjure images of a thriving, bustling settlement. We could easily imagine a city filled with traders and craftsmen of all kinds crying their wares in the shade of massive trees. There is an amazing, huge well, featuring an elaborate system of water recycling. Right next to it is a through, its stones worn down over the centuries by thirsty animals. Our guide points out water cisterns, baths and hammams, and town-wide drainage system that included proper flushing toilets. There are also many stone “pillar tombs”, apparently a very distinctive feature of the Swahili Coast architecture.

The opulence of Gedi and one the best proofs of its major importance in the Indian Ocean trade at the time is to be found amongst the many items uncovered during the excavations. There were coins from various European countries, Venetian beads, lamps from India, porcelain from Persia, Chinese Ming Dynasty vases and coins, the list goes on. With no written records, the archeologists working on the site named particular locations after what was unearthed there, leading to sometimes surprising nameplates.

The settlement was abruptly abandoned in the seventeen century, again with no records whatsoever. There were many theories circulating to date, but they were all abandoned for the lack of any material evidence. War with the natives, the Black Plague brought in by the Europeans, the rising waters of the Indian Ocean, to name but a few, were all proposed and eventually abandoned. What we know for sure is that there is a group of dedicated archeologists and researchers working on unearthing the Gedi mysteries in spite of all the superstition, conspiracies, bureaucracy and corruption that stands in their way, and that they are to be applauded for their efforts.

After leaving the Gedi Ruins, you should take a short ride to Watamu. There is an amazing Italian run café/ice cream parlour called “Non Solo Gelato”. It is located in a nondescript back alley, just off the Turtle Bay Road. Pretty much anybody there would know about it and would gladly point you in the right direction. Its ice creams are sublime and the espresso is pungent, strong and an incredible treat after walking around the sun blasted ruins for the better part of the afternoon.

After we finished our Gedi expedition and grabbed that amazing coffee, we proceeded a few kilometres up the coast for a short visit to Malindi. We arrived there in a few minutes, and our driver took us to see its most famous monument – a simple stone pillar with a cross on top, standing at the end of a rocky outcrop jutting out into the Indian Ocean. It is relentlessly beaten by both wind and waves, and there is apparently a danger of it collapsing into the churning waters below.

This pillar, its bright white paint starkly contrasting the blue of both the sky and the water behind, was allegedly erected by the famous explorer Vasco da Gama, back in 1498. On his maiden voyage to India, his first port of call was actually Mombasa, but he encountered a hostile reception there and so he came to Malindi. The local Sheikh gave him a warm welcome, signed a trade agreement, and even provided a guide for his onward trip to India, so Vasco da Gama left this monument behind as a token of his gratefulness.

The area around the pillar is actually rather neglected and dirty in places, and, save for the kiosk where you pay your entrance fee, bereft of facilities of any kind. Still, it is a rather contemplative place, and one may spend some quality time in the pillar’s shadow, observing the seemingly endless horizon and, on a much smaller scale, local fishermen going after their daily chores. That is one of the main attractions of Africa for me – while the continent and its features are always spoken about in geographic superlatives, its real stories come in small, intimate doses, on a very human scale.

TIP: Where to Eat in Malindi

Malindi, just like the rest of this stretch of the coast, is rather popular with Italian tourists, and there is a number of restaurants with very Italian names, somewhat odd at first. We went to one of those – Osteria, for a really great afternoon meal. They do have classic Italian fare, but also a number of “fusion” dishes that are all well worth a try on their lovely, shaded terrace. 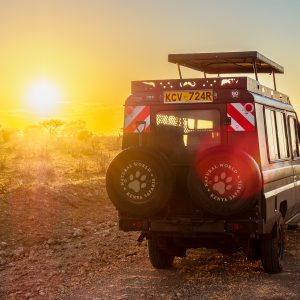 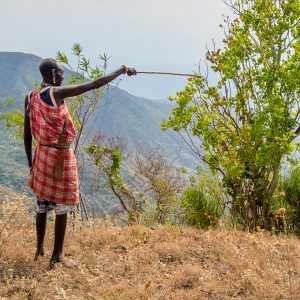