High up in the Pyrenees, between France and Spain, is the tiny country of Andorra. It’s not part of the EU and is mostly visited for its ski resorts. It’s also a tax haven, which makes it a great place to buy expensive sporting equipment, but neither of these things are why we visited.

A three hour bus ride from Barcelona city centre, Andorra is a great destination for some serious hiking up in the mountains. We went at the end of summer, in September, the perfect time to visit. Sunny, dry and cool, the perfect hiking weather. OK, sometimes I wished it was a little less sunny, but we can’t have everything now, can we.

We stayed in Abba Xalet Suites Hotel, a typical mountain hotel in Sispony, about an hour’s walk from the capital, Andorra la Vella. We would recommend staying outside the cities and towns as it’s a lot more relaxed and will give you the full mountain retreat experience.

There were a few treks around the hotel, ranging from 2-4 difficulty, all of which are pretty doable even if you’re not too experienced, but in decent physical condition. The land here is solid and rocky – very few portions with skree and no sludge this time of the year, which makes hikes safe for the less sure footed.

On the first day, we hiked upward and westwards to Colada de Muntaner. The first part was through the rest of Sispony, which is a cute little village consisting mostly of houses made of stones, one fancy restaurant plastered with Michelin recommendations, and the Museo Casa Rull, which is a house museum that gave visitors a sense of how life was in the region before contemporary times, back when agriculture was the primary economic activity of the area.

The first part of the trail required going up a pretty steep area covered with loose rocks, but it soon tapered off and became flat, winding through the forest. For a good long while, the trail was shaded and lovely to walk on. The ground was rock and earth and bordered by trees and rocks covered in moss and sprouting mushrooms.

Then the trail exited the forest and crossed through some farmland. For a while, we were walking through exposed meadows, the sun beating down on our necks. Along the way, there were quaint clusters of homes dotting the meadows. Eventually, we got to the last leg of the hike, which was up a mild incline covered in loose rocks. Along the way, we met a man who was picking mushrooms, returning from his day of foraging. He had a whole bag of all sorts of mushrooms. The amount of mushrooms looked like he’d fill two good sized oven trays and then some.

Sadly, we did not make it to the peak because there were dark clouds looming and we decided to turn back before it started pouring. Nevertheless, it was a great hike, fairly easy and pleasant, most of it through the forest.

The second hike we went on was to Font de Mallol, above La Massana. This was a more challenging hike, 4 out of 5, mostly because of the steepness of the trail. It was roughly 5km towards the turning point and another 5 back, ascending almost 1 kilometer. The trail was mostly through the forest too, although it was so steep the path was always exposed to the sun. Combined with the climb up hill, it was certainly not a walk in the park. The vegetation here reminded me of both the forests in Montenegro and the scrubland on the islands around Croatia. A mix of pines, low succulents and wild herbs.

The ascent was through these exposed forests and it went on and on. Funnily enough, when we set out, we had thought we were on a different route to the one we were on, and were expecting the hike to be easier. Nevertheless, we continued. Along the way, we missed a marking and started rambling into someone’s pasture where we encountered a snake as green as the grass it hid in. After that we picked up some sticks and made sure to check the ground ahead of us.

The hike continued this way until the very end, where the path merged into a spring bed and we found ourselves climbing up the stream itself as fresh mountain water trickled between our footsteps. It was lovely here, shaded, with the sound of the stream and branches of the pines and birches rustling in the wind and lost twigs crunching under our feet.

Eventually we came up to a  clearing at the very top and met a few guys who had driven up there and were chilling in the sun. They tried to tell us that there was a spring few meters upwards, if we wanted to refill our bottles, but we thought they were offering us water and politely refused. It was only later when we had reached one of the starting points for the hike, with some informative boards about the area, we realized that the spring was a landmark we should have visited.

Wild, untamed nature aside, there’s also a nice paved walk from Sispony/La Massana to Andorra la Vella that borders a river. If it weren’t for the highway beside it, it would be one of the nicest walks I’ve had. It was very easy, which meant you could look around you as you walk, and very lovely.

There were some part though that felt like something from a science fiction movie, with curved roads stretching overhead across the high rock cliffs the river dug into. The walk was mostly interesting because it showed how the Andorrans had matched progress with nature.

Despite the highways and the high rises, they had managed to preserve a lot of the natural surroundings and integrate it into city living. There were always a few people going about their daily runs along this walk.

Andorra la Vella is a small sized city, located along the banks of La Valira, the largest river in Andorra. The city is a shoppers’ haven because there’s no tax on consumer goods in the country. Most of it is occupied by large retailers like Zara and departmental stores selling sport and outdoor equipment.

The city also has an “old town”. It was the smallest old town I had ever visited, consisting of three small squares and some winding alleys. While you are there, I would suggest heading up to Casa de la Vall, the attraction of Andorra la Vella’s old town. There’s a tour you can take, but we didn’t have the time for it. Nevertheless, the view from the terrace of the house of the surrounding mountains is stunning and there are a few good pieces of artwork worth viewing.

There are a lot of cafés in the old town, but we recommend going a little out of your way to this place called Odei, on the other side of town. Odei is an Australian themed café, serving vegan friendly and healthy fare. Not to mention the cult coffee that has taken over Barcelona – Nomad coffee.

We can’t wait to head back up to Andorra to take on some of the other hikes in the area and also perhaps to go snowboarding during winter. 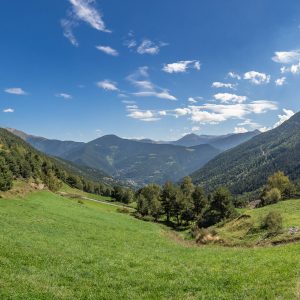