Hiking in the Atlas Mountains is something I will never forget. There are few places in the world as remote as these mountains and the villages in them. You feel this the moment you leave Marrakesh to drive up the long gravel covered roads, up into the heart of Northern Morocco.

For a city girl, the landscape of the Atlas Mountains was right out of a Hollywood movie. I had never seen mountains as massive and untamed as these. Their inaccessibility added to the mystery of it all. From the tarmac roads that ran beside the dried riverbeds to the winding dirt tracks cut perilously into cliffs that soared hundreds of meters into the sky – each provided a unique view onto an alien landscape.

We stayed at the Kasbah du Toubkal during our time there, a truly one of a kind place among the peaks of the Atlas. The Kasbah is located near the village of Imlil, and can only be reached by foot, with the help of donkeys to carry your baggage. While there are many guesthouses in Imlil, the Kahbah stands out. Situated on a rise, it overlooks the entire area and has magnificent views of the mountains and valleys that surround it. As we climbed towards it, the hustle and bustle from the village slowly fell away, and we felt like we were walking towards some sort of convent or monastery. It certainly looked like that from the outside, with its high and simple walls, and large, heavy wooden door at the gate. The interior also bore further resemblance to a place of spirituality, with a beautiful central courtyard filled with blooming wildflowers surrounded by simple huts that were the guesthouses.

Hiking through the Atlas Mountains

After a good nights’ rest we were ready to begin our trek at daybreak the next morning. Our guide, Mustafa, was waiting for us at the entrance of the Kasbah after our breakfast. He had a friend with him, and a donkey that was loaded with food and water. It also ended up carrying the bag we had packed for our one night stay at the Trekking Lodge in the Azzaden Valley, which was the end destination of the day’s hike.

Our journey began fairly easily, on flat trails that wound through gentle slopes, cutting through small mountain streams that flowed into the village. The trails that wound up the sides of the mountains were deceptive – none of them felt particularly steep, although they went on for some distance. After climbing a particularly long stretch, I stopped for a breath and only then looked up from my feet. I was awestruck at how high up we had climbed. From this vantage point, Mustafa pointed out to us where the Kasbah was – a small pinprick between the rise of the mountains surrounding it. I was surprised we had come that far, and a little terrified at how high up a rather steep slope we were.

It took a while to get used to the vertigo inducing vistas, but once I convinced myself I was not going to fall to my death, I realised how amazing the landscape was. It was unlike anything I had ever seen. We took a break at the highest point in out trek. Here, the clouds were so close I felt that if I jumped, I could touch them with my fingers. We were very high up on the roof of the world. It was here Mustafa began unloading food from the donkey and started lighting a fire to warm it all up. In half an hour, we were served a steaming plate of spiced rice with lamb and roasted vegetables. We were pleasantly surprised, and perhaps even slightly embarrassed, at this show of hospitality. Sure, we’d paid to have guides on the trek, but this truly went beyond the call of duty.

Village life in the Atlas Mountains

These valleys and mountains have been the home of the Berber people for many centuries, and they still lived as they did back then. Their impact on the nature that surrounded them was minimal, and you felt taken back in time.

What I especially loved were the small terraces carved into the mountains into which were placed orchards for fruit and vegetables – and more importantly, Argan trees. These orchards appeared intermittently, secreted away around mountain bends, in places you would not imagine people would be living. But there they were, many little Edens, untouched by modernity.

Towards the end of our trek, we walked through a hamlet with a few stone and mud houses built on a small rise above a river. It was an eye-opening experience to walk through the “main road”. At times, the path even seemed to cut through, or under, some homes. Everyone we met was very friendly, and the children seemed to be interested in every traveller that walked by. Our guide told us that this village had only gotten electricity two years ago. Because of the way it was built, with some houses almost on top of each other, and the grey stonework, it reminded me of the city of Gondor, from Lord of the Rings.

It was almost sunset when we finally hit the home run. Our guides were getting worried as it was getting dark – between long photo taking stops and my inexperience with hiking, we had taken two more hours than everyone else, and we were all dog tired. Mustafa told me to get on the donkey, as I was holding everyone back, and I did so without complaint. Being on the donkey had  the side benefit that I didn’t have to look at where I was going, as the animal was being led – and I could feast my eyes on the setting sun shining on the little village sitting at the top of its hill.

Our day’s hike ended at the Azzaden Trekking Lodge, located deep in the heart of the Atlas mountains. Here, we found perfect solitude, completely untouched by the world outside the valley. There was no wi-fi, which for me, is always a blessing. Electricity was limited, and most of the lighting was done with candles. A powerful sense of serenity and nostalgia pervaded the place. We had stepped through a time machine and materialised on the other side. The lodge is located in a valley, we felt ensconced in this pastoral paradise, with the mountains protecting us from the complex and chaotic world outside.

The service and food was, as ever, perfect. Berber hospitality has no competition. Upon arrival, we were given rose water to refresh after our long hike, then seated on the terrace and served mint tea while our lamb tagine dinner was being prepared. And let me tell you, dinner never tasted so good as when you’ve worked really hard for it. 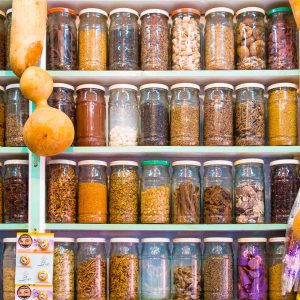 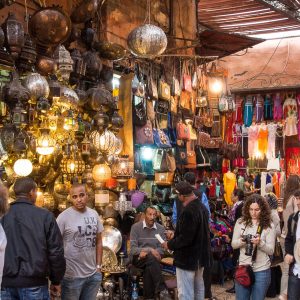 Marrakesh – A Vibrant and Bustling City 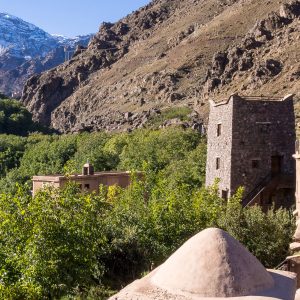