Cruise Along the Legendary Mekong

It was tempting to stay put in Luang Prabang, spending our days there in our estate on long breakfasts in the garden, or reading by the pool. We could have also hung out downtown, drinking coffee and watching the world go by in the quiet streets of Luang Prabang – but we are glad we didn’t.

There’s quite a few things to do and see around Luang Prabang. One thing that you absolutely have to do is take a cruise down the Mekong River in one of the many river boats that offer this service.

There aren’t a lot of tourist in general in Laos (compared to other South East Asian countries), so the Mekong here isn’t to crowded with boats. Sometimes, it feels as if you have the whole stretch of river to yourself.

Our cruise began in the morning, not long after breakfast, when the air was still warming up. As we set off, the mists of dawn began to lift off the surface of the river, giving a cinematic start to the day’s journey. At the jetty, there were only a handful of other river craft, mostly boats servicing the local population – transporting people and goods around.

We got onto our boat, which we had all to ourselves. We travelled leisurely up the Mekong River, with low, forested hills rising on either of its banks. The ride was slow and peaceful, allowing us to take in the scenic tropical landscape as it unfolded before us.

As part of the cruise, we stopped by a local village on our way to the Kuang Si Waterfall (the waterfall was the ultimate “goal” of the boat ride, although, of course, the boat ride was an end in itself). We were charged a small amount of money to view the village. It was a way for the villagers to make a little bit more, I suppose, or perhaps a way for them to maintain some communal facilities.

We felt slightly uncomfortable being there as tourists, watching the local people go about their daily lives, but nevertheless, it was all part of it. The experience of being a tourist in South East Asia. At least the village was well kept and clean, and the children were well fed, curious and carefree.

Personally, I think Laos has handled the arrival of tourism very well and managed to preserve its identity even while accommodating the changes that inevitably come with tourism.

Do you know what Laos and Iceland have in common? Waterfalls. You can’t really say you’ve visited Laos if you haven’t visited Khon Phapheng Falls in the south and Kuang Si Waterfall in the north… Come to think of it, whenever we visit a country – waterfalls for some reason are always an attraction – and for a good reason too. They are always amazing to watch and be around. I guess we’re so attracted to them as they remind us of nature’s power.

A visit to Kuang Si Waterfall is a whole day, whole activity affair. You don’t just go there to look at the waterfall – there’s lots to do around too. For one thing, there are paths you can climb to view the waterfall from above and below. If you’re feeling adventurous, you can also go off the track and scramble up side of the fall, which one member of our party decided to do. It sounded like fun, although the rest of us simply took the paths that were clearly built for visitors.

The other thing you can do, which is highly recommended, is to take a swim in the pools. Not all pools are open for swimming in, so you should be careful and look out for warning signs. Some of the forbidden pools are sacred to the locals and some of them are simply dangerious. The water’s cold – at least it was in January – so you’ve got to make sure you can dry off and warm up later!

We enjoyed our dip in it anyway. We did see some adventurous girls jump in from a thick branch about ten feet above the water. It definitely looks like a thing to do, according to the internet. Looks like loads of people have plunged into the Kung Si’s chilly waters in this way.

This waterfall is simply beautiful. From the gushing rapids plunging into the foamy blue green pools to the still lakes of crystal clear water away from the main swimming areas – we spent many hours there and had so much fun. When we return to Laos, the Kuang Si Waterfall is definitely a site we would love to visit again. 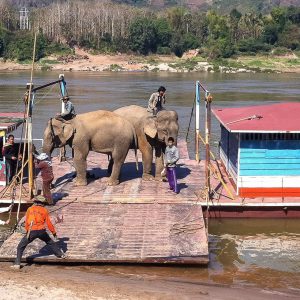 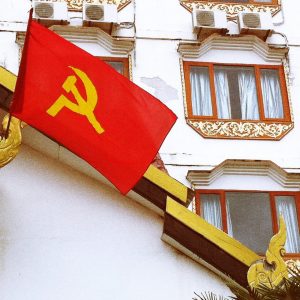 Vientiane – a Little Piece of France in South East Asia 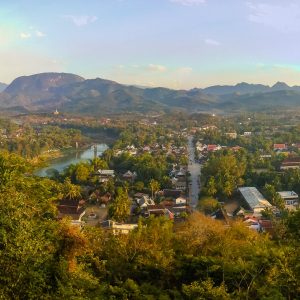 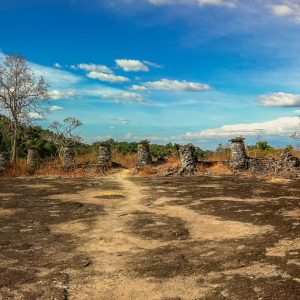 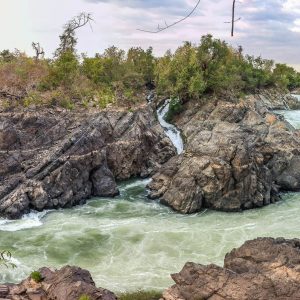